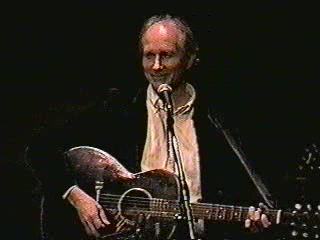 The Bells of San Blas
Recorded circa 1983, probably at Speakeasy in New York City.

"The Bells of San Blas" takes its title from Longfellow's last poem. The released version is on Jack Hardy's 1984 album The Cauldron. The song describes the quinceańera celebration for Mexican girls on their fifteenth birthday.

The Changing Wind
Recorded December 9, 2000, at the Blackstone River Theatre in Cumberland, Rhode Island, with Kate MacLeod on fiddle and Mike Laureanno on bass.

It's common for Jack to play harmonica on this song, but this version features the interesting interplay of Jack's harp and Kate's fiddle.

The Ghost of Grierson
Recorded November 11, 2000, at The Vanilla Bean in Pomfret, Connecticut.

Jack wrote this song after the death of his good friend and fellow poet/songwriter Al Grierson.

This song was recorded for the 1991 album Through. As Jack notes in his brief introduction, his inspiration for "The Knight's Dream" came a decade earlier in Greenwich Village.

Marlene
Recorded in January of 1985 at Gerde's Folk City in New York City.

"Marlene" would appear on Jack's 1987 album The Hunter.

Jack's own rendition of his song that was released by Suzanne Vega on her fine album, Songs in Red and Gray.

Through
Recorded January 31, 1993, at Passim in Cambridge, Massachusetts.

"Through" is the title song of Jack's highly acclaimed 1990 album. The Through CD in the Collected Works boxed set contains two versions of the song, the "European mix" from the original CD and the "American mix" which was a cassette single in the U.S.

Written in late 1995, "The 20th Century" is one of the first songs about the new millennium and appears on the 1996 album The Passing.

Woman of the Road
Recorded June 6, 1982, at Speakeasy in New York City.

These sound files are provided for personal enjoyment by the kind permission of Jack Hardy. Distribution or commercial use is prohibited.